Another great place to visit this summer is Laos. Check out the suggestions bellow and then text your friends to book a trip of a lifetime. 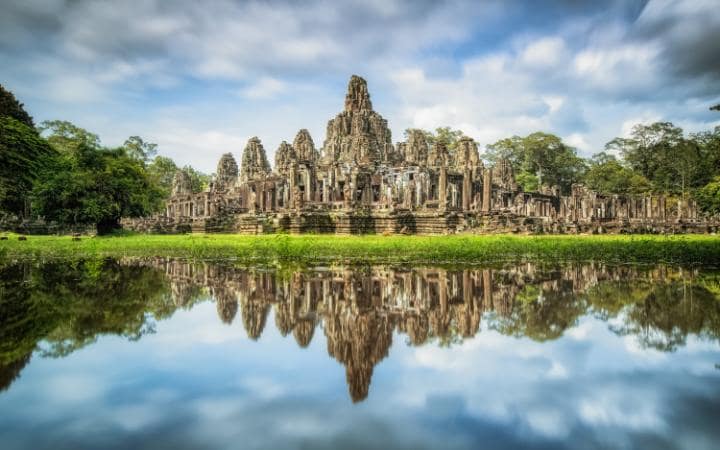 That Luang is a gold-covered large Buddhist stupa in the centre of Vientiane, Laos. Since its initial establishment, suggested to be in the 3rd century, the stupa has undergone several reconstructions.

Wat Si Saket is a Buddhist wat in Vientiane, Laos. It is situated on Lan Xang Road, on the corner with Setthathirat Road, to the northwest of Haw Phra Kaew, which formerly held the Emerald Buddha.

Buddha Park, also known as Xieng Khuan, is a sculpture park located 25 km southeast from Vientiane, Laos in a meadow by the Mekong River.

Patuxai is a war monument in the centre of Vientiane, Laos, which was built between 1957 and 1968. The Patuxai is dedicated to those who fought in the struggle for independence from France.

Vat Phou is a ruined Khmer Hindu temple complex in southern Laos. It is located at the base of mount Phu kao, some 6 kilometres from the Mekong in Champasak Province.

Wat Xieng Thong is a Buddhist temple, located on the northern tip of the peninsula of Luang Phrabang, Laos.

The Kuang Si Falls, sometimes spelled Kuang Xi or known as Tat Kuang Si Waterfalls, is a three tier waterfall about 29 kilometres south of Luang Prabang. These waterfalls are a favourite side trip for tourists in Luang Prabang.

Mount Phou Si, also written Mount Phu Si, is a 100 m high hill in the centre of the old town of Luang Prabang in Laos.

The Bolaven Plateau is an elevated region in southern Laos. Most of the plateau is located within Champasak Province of Laos, though the edges of the plateau are also located in Salavan, Sekong and Attapeu Provinces.

Wat Mai Suwannaphumaham often simply Wat Mai or Wat May is a Buddhist temple or wat in Luang Prabang, Laos. It is the largest and most richly decorated of the temples in Luang Prabang.

Haw Phra Kaew, also written as Ho Prakeo, Hor Pha Keo and other similar spellings, is a former temple in Vientiane, Laos. It is situated on Setthathirath Road, to the southeast of Wat Si Saket.

Published by The exploring teacher

I am a Junior School teacher in sunny old England currently building a new app called x marks the ___. X marks the ____ is a new way of blogging and sharing experiences. I'm looking to build a great bank of stories and pictures of peoples journeys around the world. The end goal is to produce an amazing app that will help travellers, backpackers and just your average holiday goer to book and plan a trip all in one place based on your pictures and personal reviews. View all posts by The exploring teacher